Memories of our All Ireland Club Win - A must see documentary 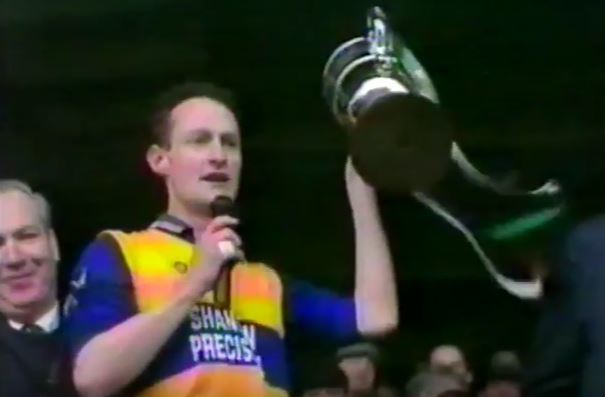 Published: over 5 years ago

1996 was a historic day in our clubs history when we captured the Tommy Moore cup for the first time at the expense of Antrim champions Dunloy. This year marks the 21st anniversary of that win when Ian Mulready climbed the steps of the Hogan stand and its appropriate that a piece of TV gold has been produced by local lad Barry Corbett documenting the road to glory of that year. The documentary directed by Barry as part of a college project includes interviews with most of the players from the team as well as some match highlights along the way.

The memories of scraping past Scariff with a last minute David Chaplin goal along with the Munster Club final against Eire Og which is regarded on Garney side by many as the greatest hour of hurling produced by a Bridge team are discussed as well as the scenes of joy at the homecoming. Martin Conlon has a great quote when he says "It was'nt the time of text messaging but if it was you would never dream of texting Jim Fawl to say you werent going training!".

This is a must watch for all Bridge supporters so grab a cup of tea and sit down, relax and reel in the years!

A special word of thanks to Barry and his team who produced the video for allowing us to share it and appreciation to the owners of the video footage and commentary for gathering great memories for us all.

If you have exhausted all your ideas for a Christmas gift...

All Roads Lead to Killeedy this Sunday for Junior B Hurli...

Best of luck to our Junior B Hurlers who face St Brendans...

Our U21A Hurlers bowed out of the championship on Sunday...