Our U11 squad had an early start on Sunday morning as they set off from O’Garney Park as the sun rose from Gallows hill across enemy lines. In what might have been a first for an away trip, all the players and coaches arrived on time so we headed off on schedule for the mighty Sarsfields club in Cork to play in their Annual U11 Tim ‘Birdie’ Hayes Tournament.  Tim was a member of the 1951 Sars County Champions, he played at left full back and was a club stalwart all his life. We felt privileged to be asked to play in this tournament and we took the opportunity to travel in style by bus and to make it a day out for the highlight of the U11 season.

En route to Sars we made a pit stop in Mallow to Supermacs for a toilet break (what the players didn’t realise was that this stop was really for the coaches and parents to get their all important cappuccinos and lattes!).  We arrived in Sars in good time and were met by Ger and his team who had arranged parking for the bus, a dressing room for us and a warm-up area. There was non stop refreshments of the best of food provided for the whole day. All this great preparation ensured the tournament was a success. Many thanks to Ger and his team in Sars for the hospitality - they couldn't have looked after us better and it was very much appreciated by all of our U11 squad. 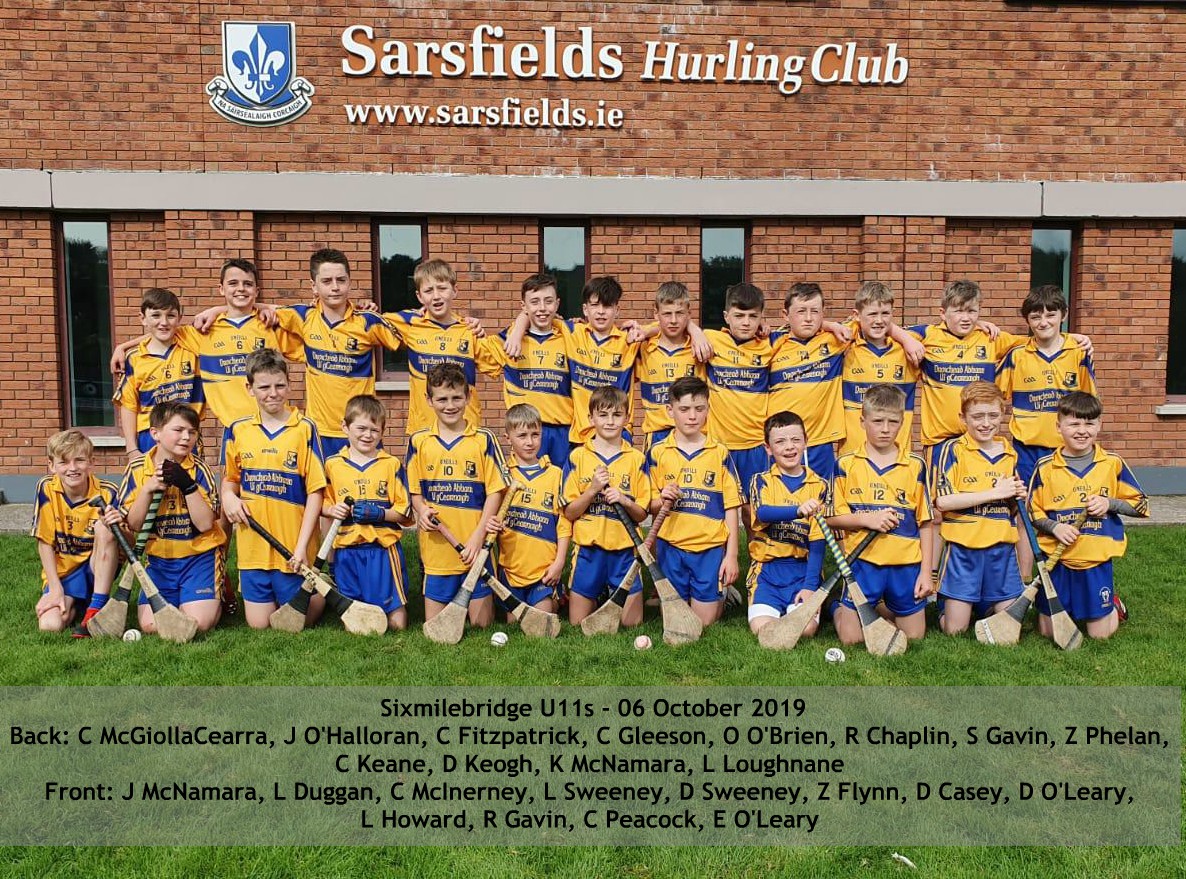 The Tournament format was a league basis with each clubs fielding two 11 aside mixed-ability teams. In our first match we played against our good friends in Monaleen and both SMB teams were victorious.  We then played the famous Ballygunner club from Waterford but lost by the smallest of margins and they deservedly went on to win out the tournament.  Our last match was against our hosts Sars who we had beaten narrowly in the final of an U10 tournament in Clonmel last year. Sars didn’t forget that day in Clonmel and they took revenge with comfortable wins in both games.

After the tournament we got the bus back to SuperMacs in Mallow for a feast of their finest burgers and nuggets all topped off with a dollop of ice cream. Many thanks to DJ Cuan and his boom box for the entertainment on the bus. The tunes and the backing track provided by Rory on the bodhran ensured that the parents who opted to drive down made a very, very wise choice!   Days out like this really develop a team spirit within the group and many thanks to Adrian, the wider U11 management team and the club for facilitating such days out. Well done to all players who showed a great attitude throughout and especially when some results didn’t go our way. Most importantly we are always learning and developing as players (and coaches!). 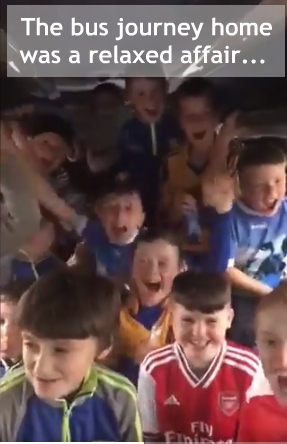 Some highlights from the matches included:

The twin towers on the brow of the square, Charlie Keane and Conor Fitzpatrick led the attack and rattled the onion bag for 2 goals each in the first half. The second half was a tighter affair. Larry Howard and Zach Flynn fought to see the game through and they battled bravely throughout the match.

Daithi Casey made some outstanding saves throughout the day but in this game he made a dive to the post to save a penalty to keep our hopes alive as Ballygunner had got a good start on us. Conor Peacock was as reliable and consistent as ever with long clearances into the forwards and this helped to steady the ship heading into half time. The boys battled bravely and brought the deficit to a single point mid way through the second half. Jack O’Halloran showed his leadership qualities with a catch above  the clouds just like the great Sars player ‘Teddy McCarthy’ in the dying minutes as he fought bravely to try and get that elusive leveling point. Along with these efforts, Killian McNamara caught a long delivery and boomed it back down the park to set up another attack. We battled to the death but couldn’t get that equalising point. The boys (and management) were devastated afterwards. We quickly realised that we showed immense resilience to fight back to the death and this is why we go these tournaments. We dusted ourselves off and got ready for the famous ‘Sars’. 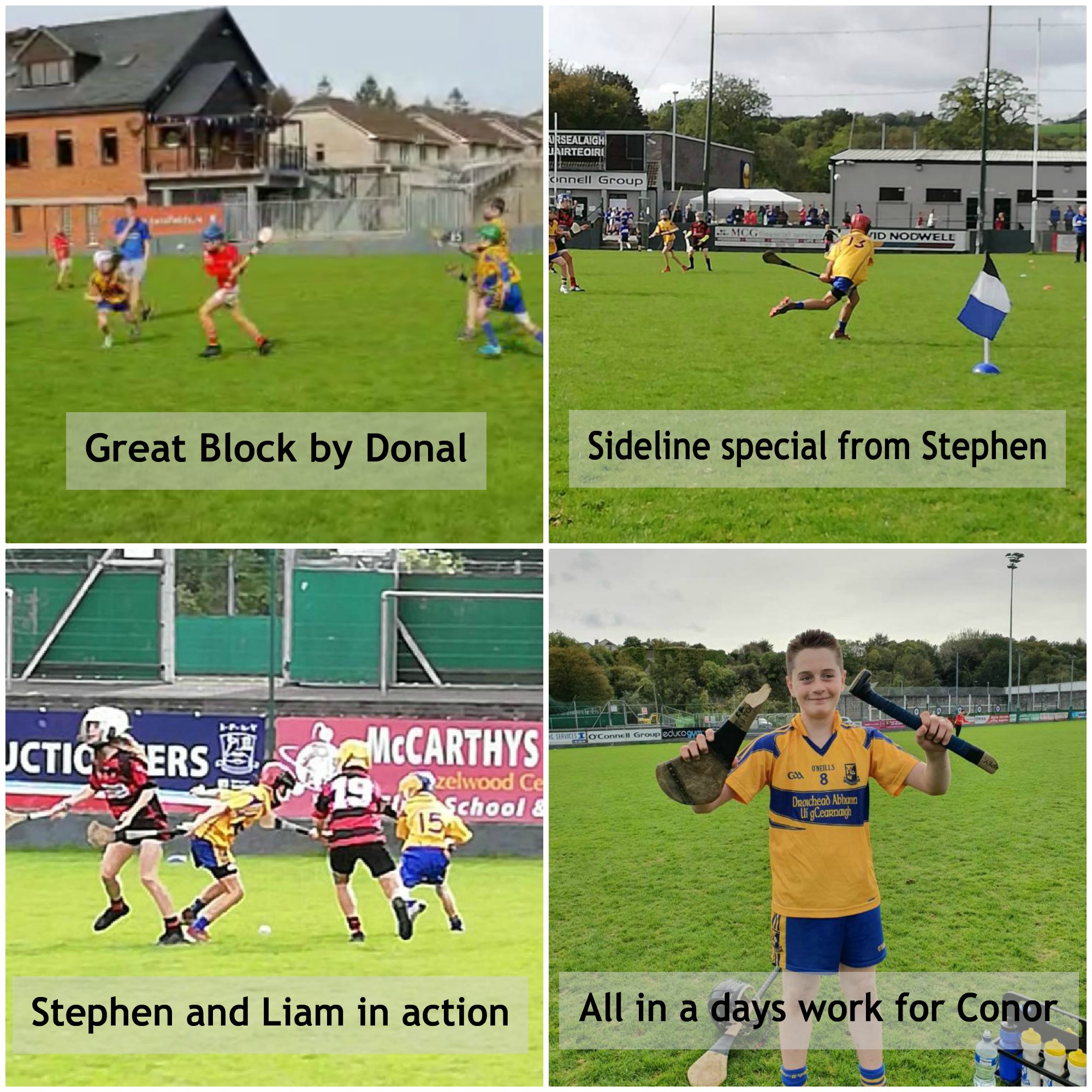 Sars started fast and a few positional changes were needed. Cuan Mac Giolla Cearra was a driving force when he got some freedom after being moved up to the forwards by our master tactician Damien Keane. The switch had a double boost as Leon Duggan came to life in the full back line and he cleared ball after ball to really steady the ship in front of goal. Rory Chaplin captained the side and got some vital scores throughout the day, he chipped a super sideline ball over the bar against Ballygunner and also in this game he cleverly one handed batted a ball to the back of the Sars net as he looked certain to be hooked or blocked. Donal O’Leary, the engine of the team led by example with his never say die attitude. His hooks, blocks and skill in the middle of the park showed his teammates great leadership all day long. We battled bravely but came up short against a very good Sars team.

The game started with great defending by Logan Loughnane at left wing back. His instruction was to stick like glue to the flighty forward number 10. He done more than that as he was first to every ball and eliminated all threats of scores. To his right Jack McNamara played a stormer,  batting the ball and attacking while laying off many clearances to Liam Sweeney who launched the attack against the Monaleen backs. The second half saw the introduction of Ronan Gavin to right half forward (he normally plays at full back for Caimin Moreys U9 squad) with clear and simple instructions from Kevin Phelan - bury man  ball and all if you get a chance - and in the 10th minute he rattled the Monaleen net with a Noel Casey style ground strike.

Ballygunner proved a real battle, two serious saves and long clearances by Cian McInerney kept us in the game to half time. Oisin O’Brien at corner back was like Halla in ‘95 and wrapped up the corner forward in a web. Eoghan O’Leary man-marked and dominated their number 8 who was identified earlier by our sideline spy (Eoin Gavin) as a serious attacker. The second half saw the Bridge lads hold Ballygunner to scoring just one point and a last minute run by our athletic team captain Zak Phelan saw us back on the score board. The 12 minute half was short and our lads can’t wait to get a re-match with Waterford boys, before a Munster Club tie maybe! 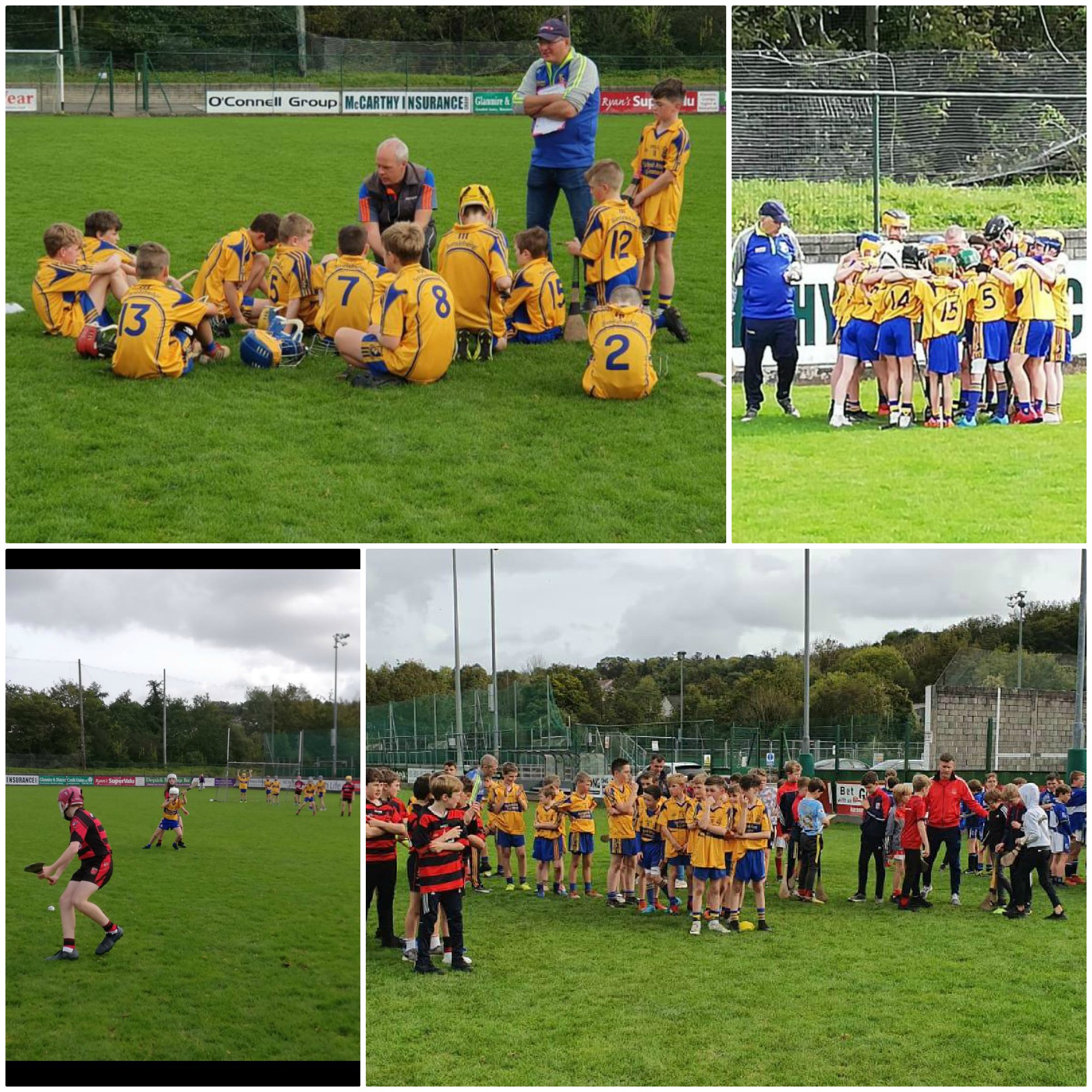 The last game of the day was against the home club Sarsfields. The intensity saw Zak and Stephen collide at speed. The collision got the adrenaline pumping and Stephen Gavin tallied 2-3. Corner back Dylan Keogh was supreme and cleared the ball striking naturally both left and right. Daragh Sweeney led the attack toward the final minutes with a classy side step on the Sars half back to land a beautiful ball into corner forward Conor Gleeson who drove the ball through the back of the Sars net. His Cork grandad was so proud and definitely attributes Conors killer instinct to the half Rebel in him.